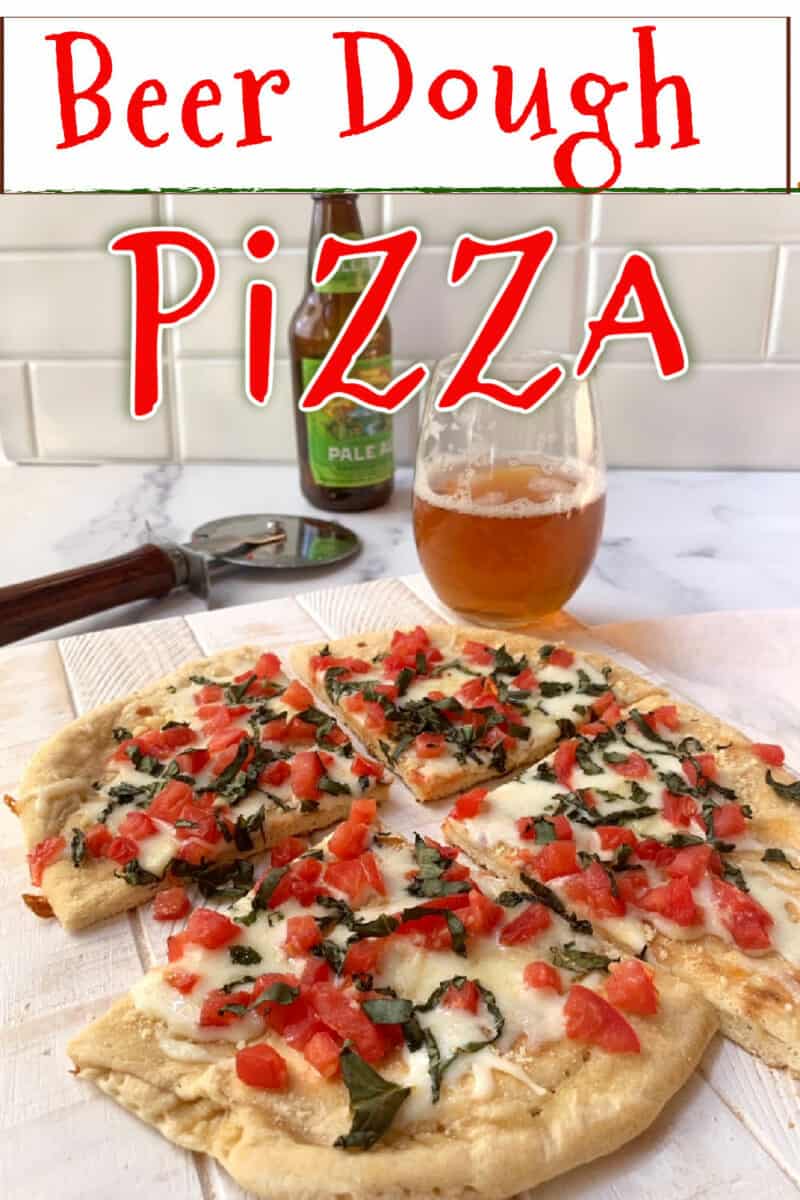 Craving pizza? Try this Quick Skillet Pizza with Beer Dough. Yes, making dough with beer is a thing and no yeast is required just your favorite beer.  And one more thing, no oven is required. Seriously. You just need a beer and a skillet to make this golden brown crispy and chewy crust Margherita-inspired pizza.

🍕Homemade pizza for one

Normally pizza dough is made with water and yeast and for this recipe, the beer is going to replace both. The dough doesn't rise much but gets a little help from the baking powder.  You will get more of a thin crust that will get nice and crispy outside and still chewy inside.

The flavor of the dough depends on the type of beer you use and you will taste just a hint of the beer. We are Sierra Nevada fans and usually have that in the fridge, but feel free to use what you like.  I haven't tried a dark stout yet, so can't give you any thoughts on that.

This dough is nice and soft with some elasticity to it, let it rest for 10 minutes to relax the gluten and then roll away.

Making the dough in a bowl

Add the flour, baking powder, salt, and sugar to a medium-sized bowl and whisk it together. Pour in the beer and olive and mix with a fork until combined and the dough leaves the sides of the bowl.

Making the dough in a food processor

Add the flour, baking powder, salt, and sugar to the food processor and whirl to combine.  Pour in the beer and olive oil and process until the dough leaves the sides of the bowl. It is best to use a small food processor since this is a small amount of dough.

Rolling the dough and making the pizza

Turn the dough out onto a floured surface and knead to form a smooth ball, cover with plastic wrap, and let rest for 10-15 minutes, or up to two hours. I use a muslin rolling mat for all rolling doughs.

The longer you let this rest the more flavor the dough will develop.

While the dough rests chop the tomatoes and mix with salt then put the tomatoes in a strainer over a bowl. Chop the basil into thin slivers.

Cook the dough for 3-4 minutes until the bottom is brown and crispy, flip the dough over then lower the heat and add the tomatoes, cheeses, and basil. Cook covered for 5 - 7 minutes, watching the bottom crust so it doesn't get too brown.

Slide the pizza onto a cutting board and cut it into fourths and enjoy!

Other recipes made in a skillet

Why you will love this pizza

So I hear ya, if I'm only using ⅓ cup of beer what should I do with the rest?  Well, you can make a double batch of this dough or another single recipe for the dough and freeze it for up to three months, or do as I did, and drink it while cooking the pizzas.  Either way works! 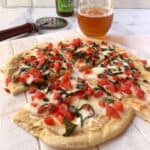 As an Amazon Associate I earn income from qualifying purchases.

The recipe adapted from Cooks Country magazine. Options for cooking the pizza.

From learning to cook on a farm in Indiana to culinary school in California, my passion for food is never-ending.  Turning on my oven to bake something for friends and family is my happy place, and I am glad to be here at One Hot Oven sharing both sweet and savory recipes with all my baking friends.