You are here: Home / Pies and Tarts / How To Make A Flaky Pie Crust
Thanks for sharing!
Jump to Recipe Print Recipe

This is my Basic Flaky Pie Crust Recipe.  It comes together quickly, tastes great, and can be used for any recipe that needs a pie crust.  No need to use a store-bought crust anymore!

How to make pie dough for a flaky pie crust 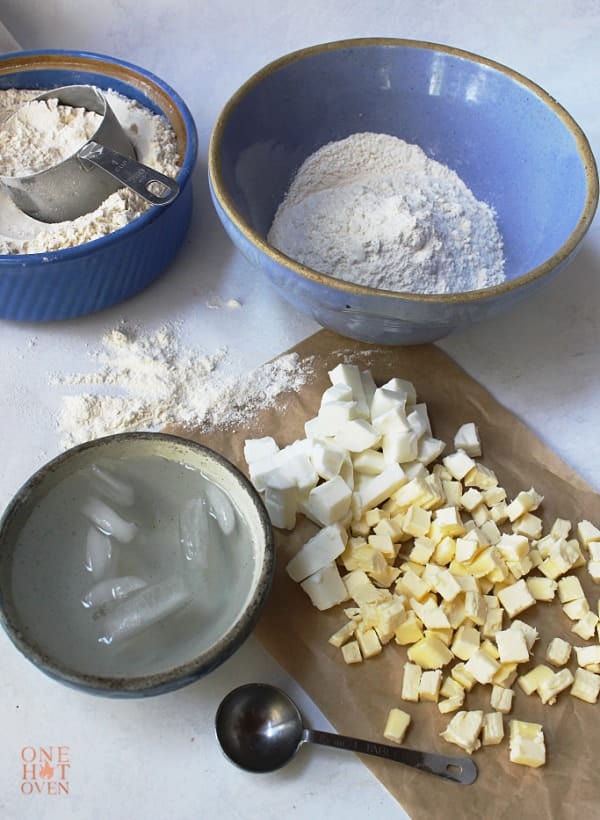 Butter vs Shortening in Pie Crusts: The Debate

Mixing: Tips and Tricks for a Flaky Pie Crust

Once you’ve mixed the flour and salt together, it’s time to cut in the fat.  Add your butter and shortening and chop them down into marble-sized pieces.  There are a few ways to do this.

What do you do after you are done mixing the dough? 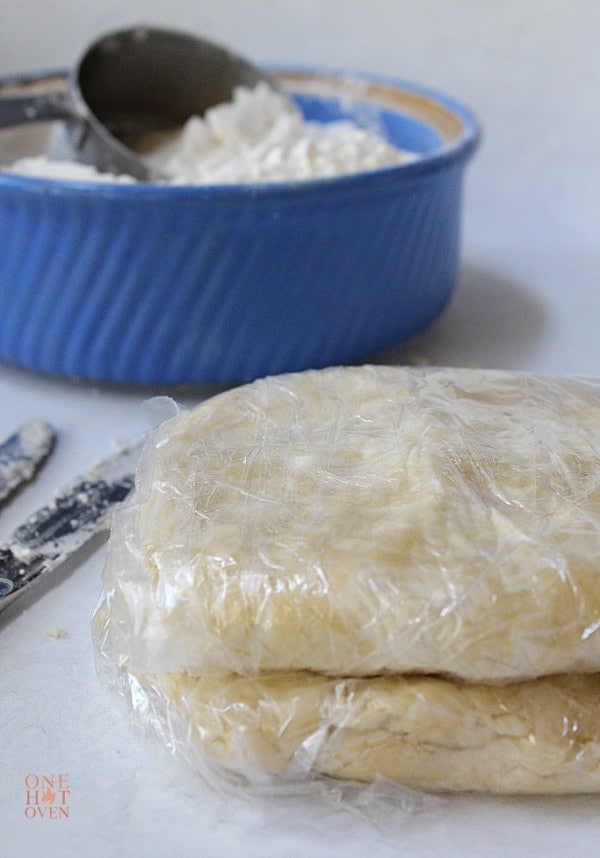 Keep Things Cold – why is this important?

When you bake your crust, the little pockets of fat in the pastry melt away.  You should be able to see pieces of butter or shortening marbled into the crust when you put it into the oven.  This creates the flakiness we’re looking for.

To get the perfect crust, do not let the butter melt.

Your crust will still taste good but will be closer to a shortbread consistency.

Now you’ve got the basics!  Don’t worry if it sounds complicated.  Pie crusts are very forgiving. Got impatient and added too much water?  Let your butter melt a little too much? Overworked the dough? No worries!  Add some delicious filling and no one will notice.

Now that your dough has chilled its time for rolling.

Place the dough on a lightly floured surface and let sit for about 10 minutes so the dough will soften enough to roll.  I prefer using pastry cloths for rolling all my doughs.  I roll it up and keep it in the freezer.

Flour the rolling pin and roll the dough into a round, It helps to make several small turns of the dough as you are rolling. The dough circle should be 2-3 inches larger than your pie plate. Just sit your pie plate on top of the dough to see if it has been rolled big enough.

Roll the dough around the rolling pin to transfer it to the pie plate. I love this Rae Dunn pie plate, its the perfect size for my pies and I have to say this….cute!

After the pie dough is in the dish, lightly press the dough into the sides.

Once you’ve got the recipe down, try mixing it up.  I like to add cinnamon to crusts for my apple and peach pies.  You can replace the water with Greek yogurt. Sub out some or all of the flour with almond flour for a textured, nutty crust.  Replace two tablespoons of flour with cocoa powder for a chocolate crust (the cocoa powder will melt a little though, so this works better on cooler days).  British recipes will often replace the water with a beaten egg for a richer crust.

This recipe can also scale up or down.  As is, it makes enough for one double-crust pie and a couple of jelly tarts.  I halve it for custard pies that don’t need a top crust. Or I’ll double it if I know I’ll be making several pies in the next month.  Just portion it out and stick it in the freezer where it will keep for up to a month. 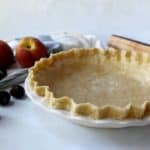 How To Make A Flaky Pie Crust

Plan ahead and chill the butter and put the shortening in the freezer for easier handling of the pie dough After making the pie dough chill for at least one hour. For a single crust pie just half the recipe

The end result of this pie dough is a beautiful brown, butter-flaky crust that will taste delicious with all kinds of fruits, custards, and creams.

Don’t forget to pin for later when you have that urge to bake a pie. 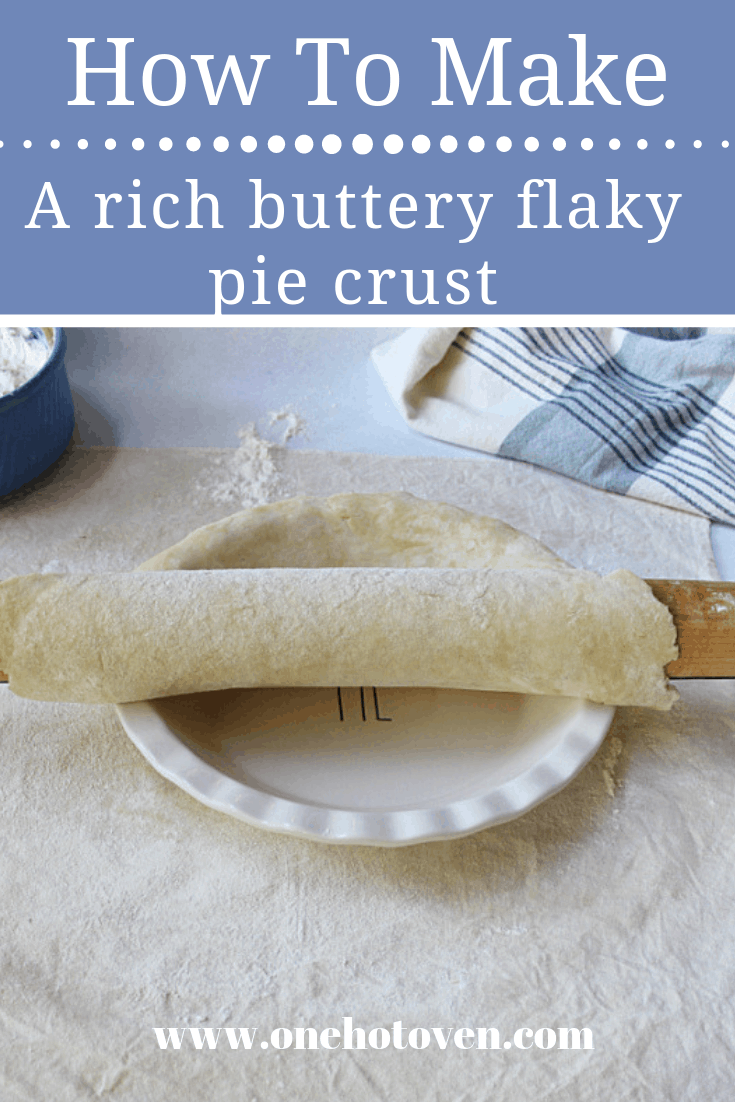 Check out these blog posts for more pie crust inspiration from One Hot Oven.

Sometimes you need a prebaked pie crust for all those luscious cream pies. Make sure to check out the One Hot Oven post on How To Blind Bake Pie Crusts.

Have leftover pie dough? Make these Quick and Easy Jelly Roll Pie Tarts. These are a family favorite treat.

Have you ever made a galette? This Apple-Cranberry Galette is a free form pie that is quick and easy to make. No pie plate required. 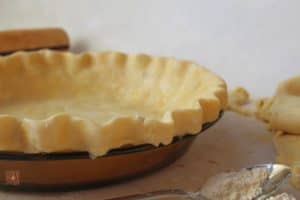 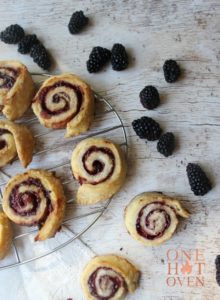 Here is what I use when making and serving pies.

Welcome, I am Jere’ the baker at One Hot Oven. I love sharing recipes both sweet and savory that inspire you to bake at home. Food has a way of bringing us all together, from a simple batch of cookies to a three-tier cake. It is important to gather your family and friends around the table over delicious food, great conversation, joy, and laughter. Let’s bake something wonderful.

Our lemon tree is in harvest which means we have a

Our Easy Mandarin Orange Bundt Cake is updated and

It rained all day today which made it a great day

Happy #nationalhotteaday to all our tea lovers. We

We are so exited to be working with @chocoleychoco

January is the perfect time to bake seasonal treat

Christmas time is our favourite time of year to ma

Our newest recipe to the blog is our Oat Tea Biscu

We are working on planning our menu for Christmas

We’ve made three loaves of this bread so far thi

We use cookies to ensure that we give you the best experience on our website. If you continue to use this site we will assume that you agree.OkNoPrivacy policy