Today I am sharing the good, bad, and ugly truths around making this crust. 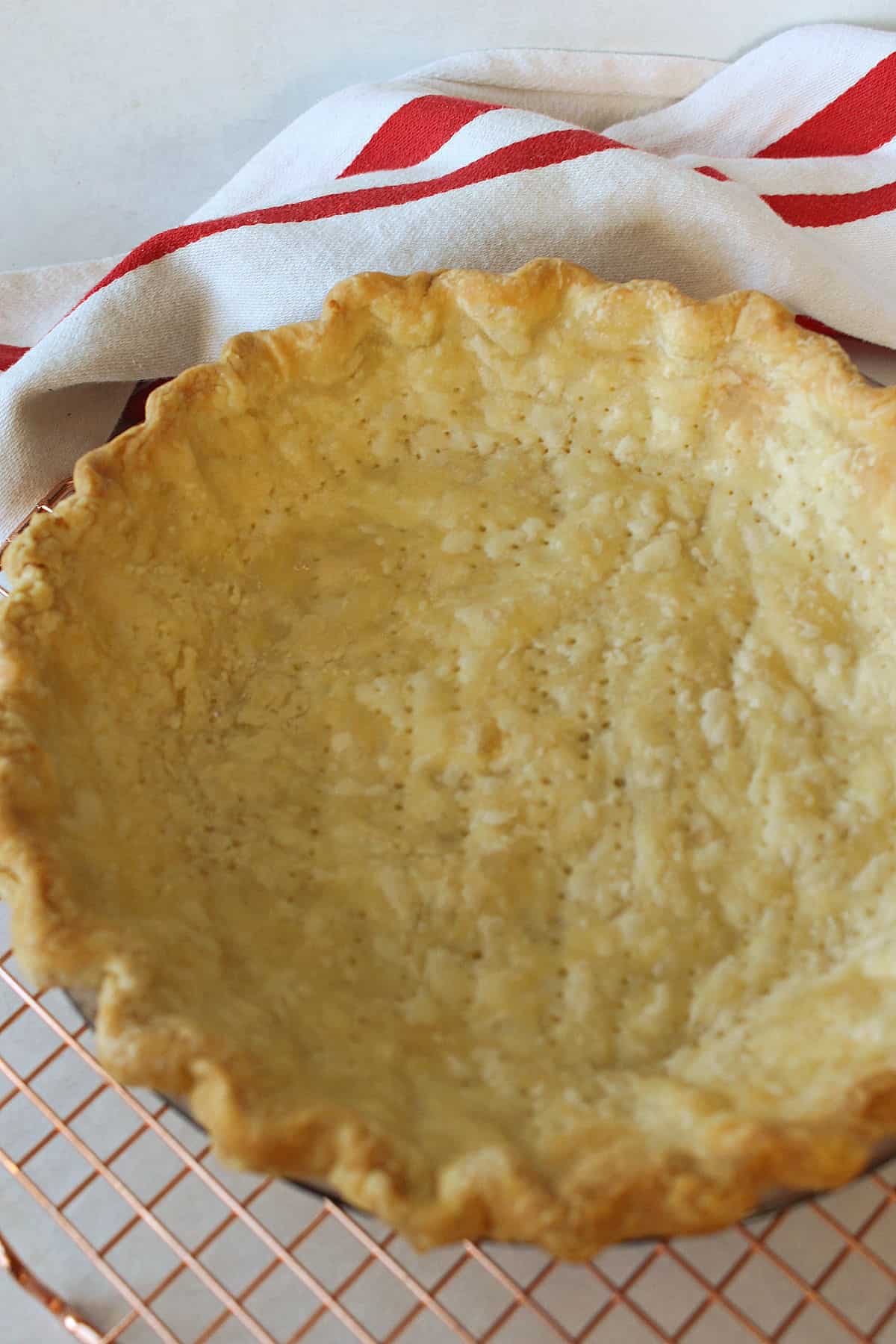 This page may contain affiliate links, please see my full disclosure for policy details. I earn commissions if you shop through the links on this page

The technique for blind baking or some call it pre-baking, is not hard but there are several steps to take for success so you can make a pie crust without shrinking.

What happens if you don't weigh down the pie dough during baking?  I can almost guarantee that the pie crust will bake into some odd-shaped, puffed up, or a weird-looking crust.

This pie crust just went in the oven without chilling and without weights. It's just not pretty, the sides collapsed and the crust shrunk and bubbled up on the bottom. 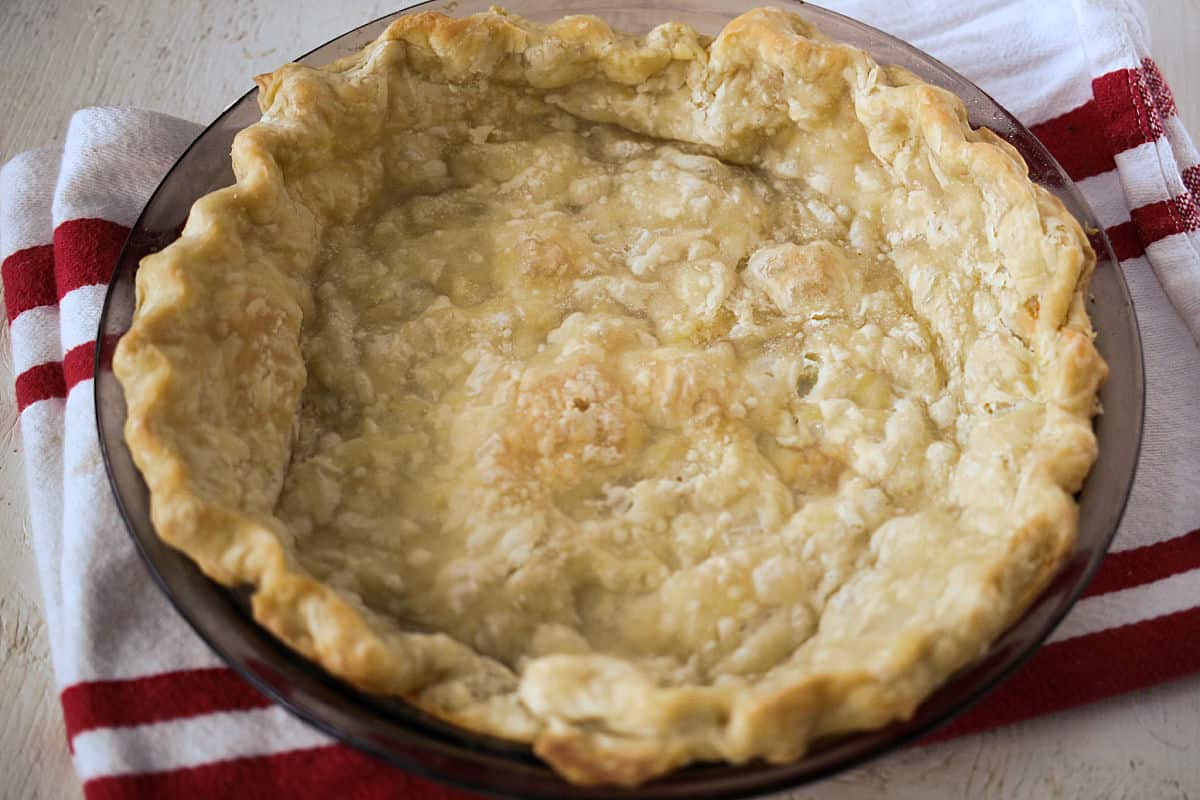 This crust was chilled and it looks a bit better, but since the crust was not weighted down or docked it bubbled up. You could still use this but when you go to cut your pie, all those bubbles in the crust will collapse from the weight of the filling and your pie slice will be one big ugly mess. 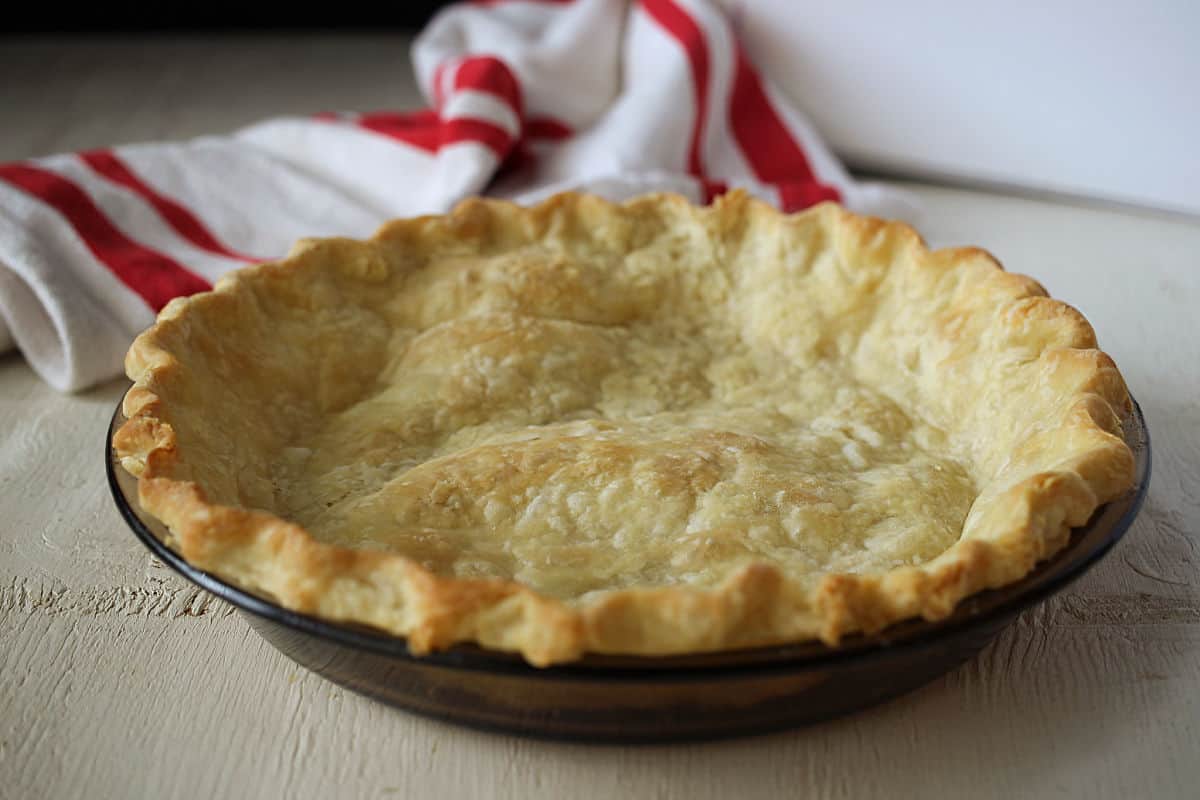 Now that you have seen what not to do, let's look a the right way to blind bake a pie crust. Don't let these steps intimidate you they are all easy.

The pie plate ~ for cream pies you usually do not use a deep-dish pie plate.  I use the basic pie plate that is 1.25" high.   Just make sure your dough recipe is the right size for the plate. The pie plate should have a nice edge on it so when you crimp the pie dough it adheres to that edge.

The dough ~ For most of my pies I use half butter and half shortening for two reasons, I like the taste, texture, and flakiness of the dough.  For blind baking, this dough holds its shape better than an all-butter dough since the shortening doesn't melt as fast as butter.  This is not to say you can't use an all-butter dough. Your preference.

Chilling the dough ~ This is a must.  After you put the dough into the pie plate just pop it into the fridge for a half-hour and your dough will be happy and so will you when you pull it out of the oven and it's held it's pie shape.

Pie weights - Weighing down the pie crust while it bakes keeps the crust from bubbling up and falling over.  My preference is rice but you can use beaded pie weights, beans, lentils, or even sugar.  Line the pie crust with parchment paper then fill the cavity with your desired weights.  Don't throw the rice away, you can actually cook it or store for another pie.

Docking the crust - To release the stem that is under the pie crust you need to dock the crust by taking a fork and poking the half-baked crust with the tines.  Do this all over the bottom and the side.  You will dock the crust mid-way through baking and after the weights have been removed.

How to blind bake a pie crust

Step 1. The chilled pie dough is crimped on the edge of the pie plate. 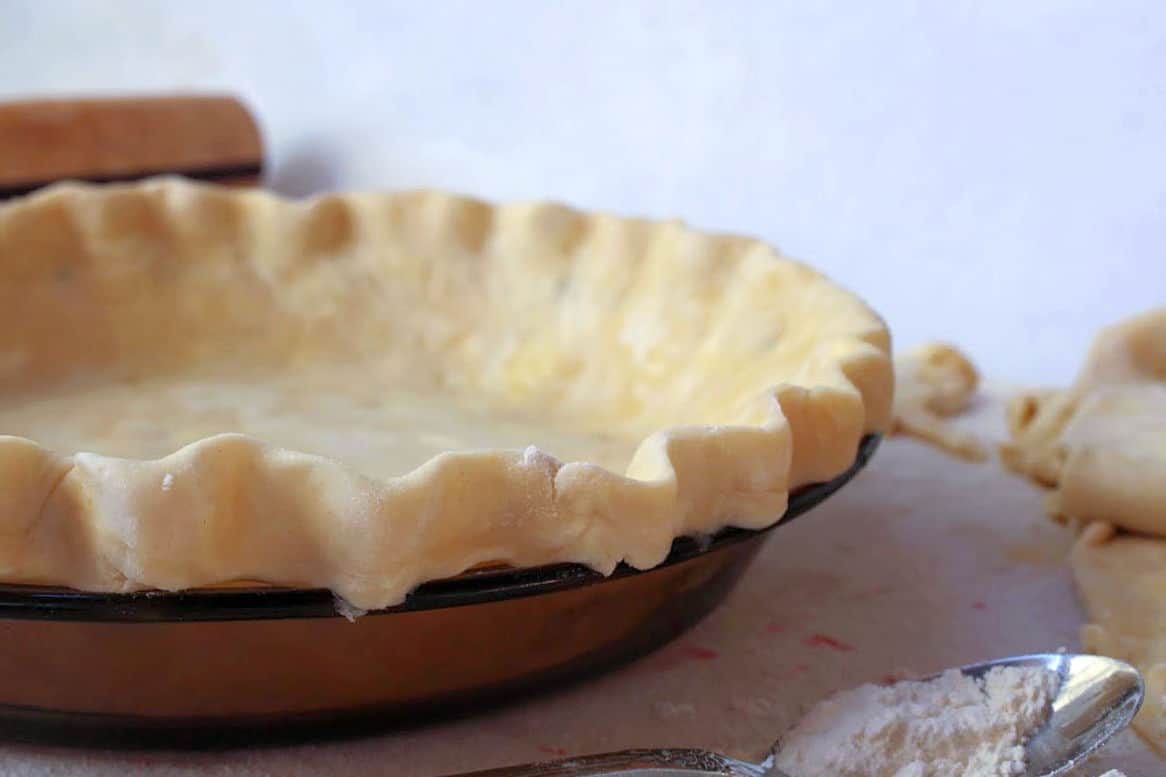 Step 2. Place the parchment paper in the pie shell all the way to the top of the crust 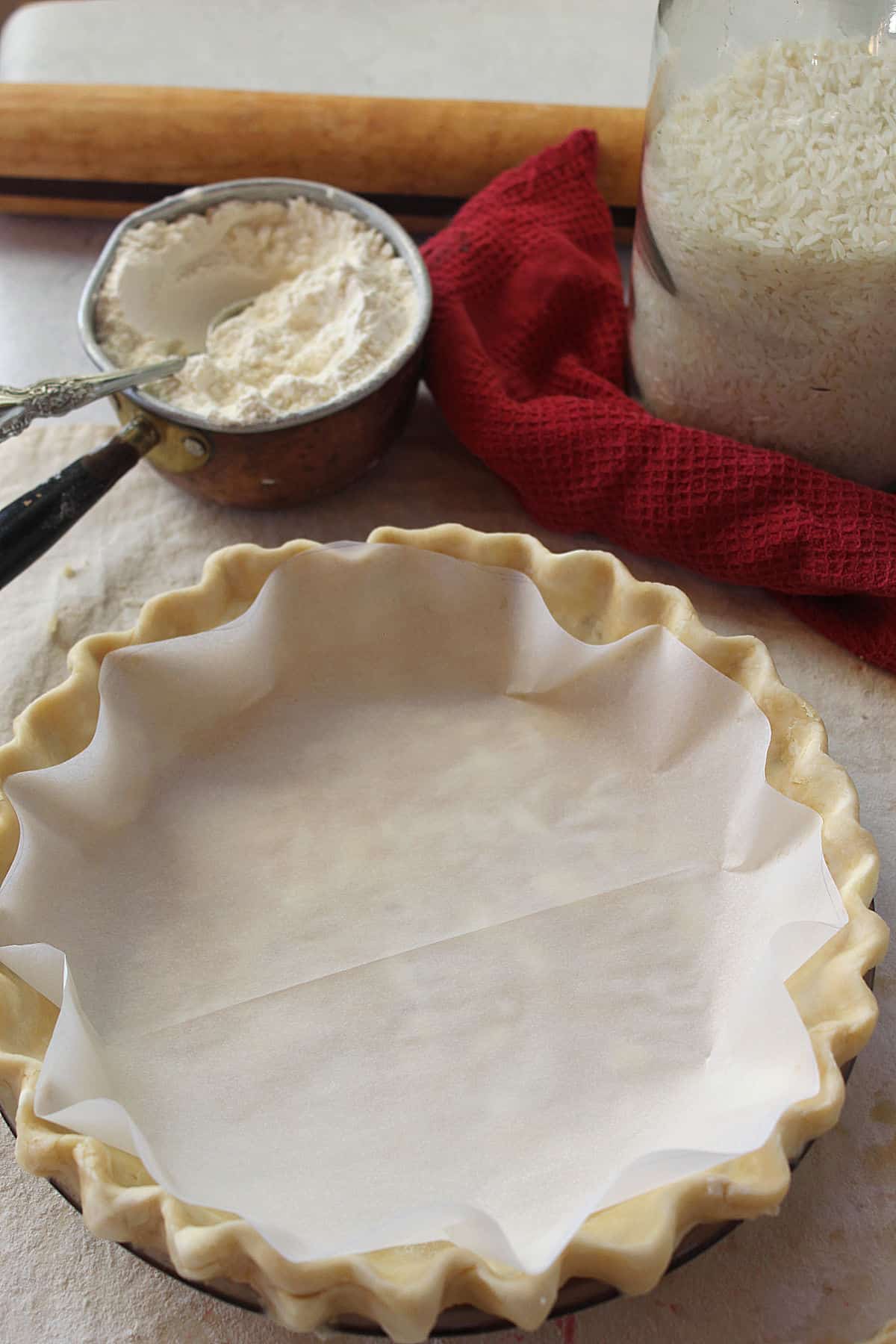 Step 3. Fill the pie shell with rice, or your desired weight. I fill the shell almost full and into the crimped edges of the crust. 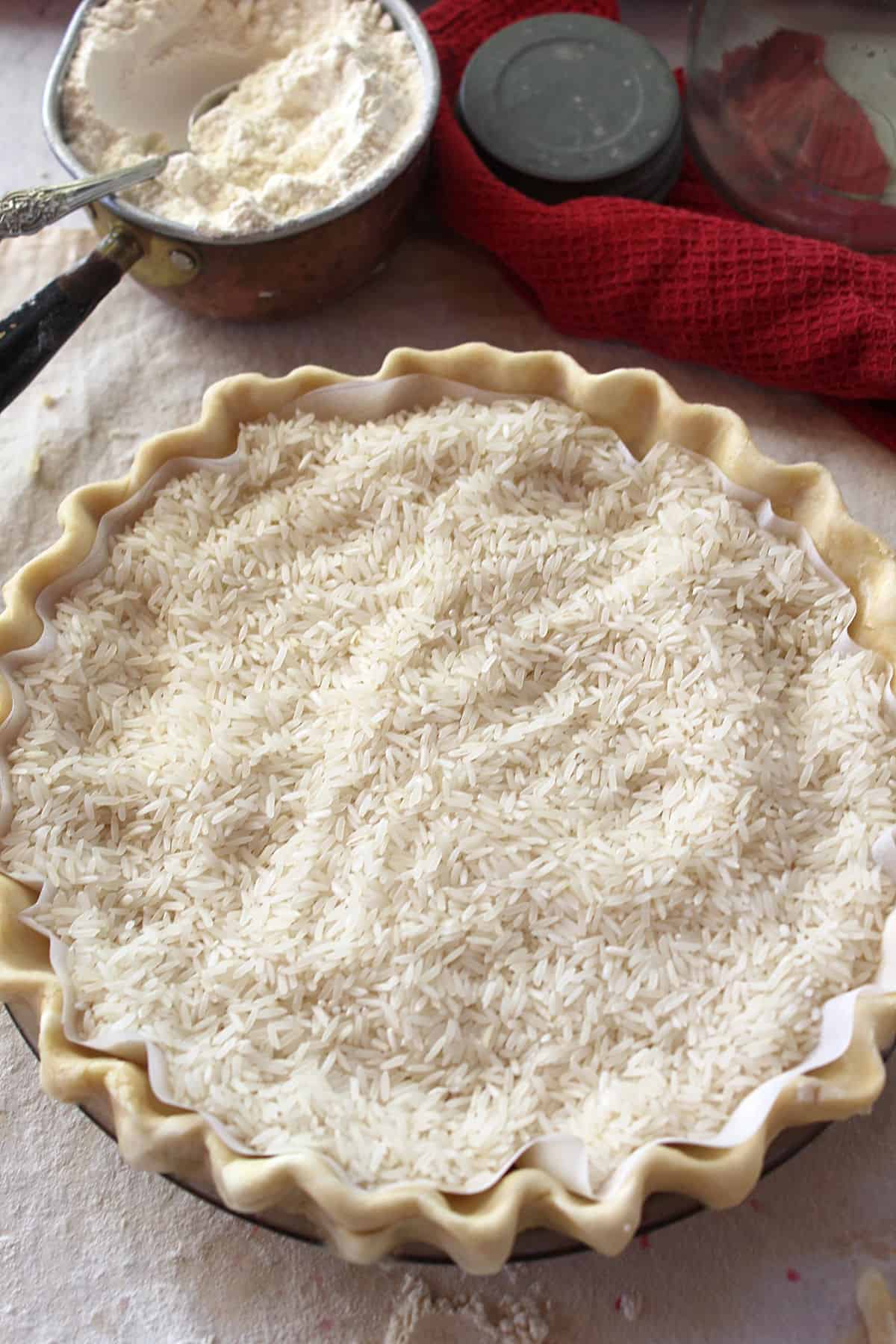 Step 4. Bake for 20 minutes at 375 degrees F. After that time remove the rice and parchment. Here is the partially baked pie shell after the rice is removed. 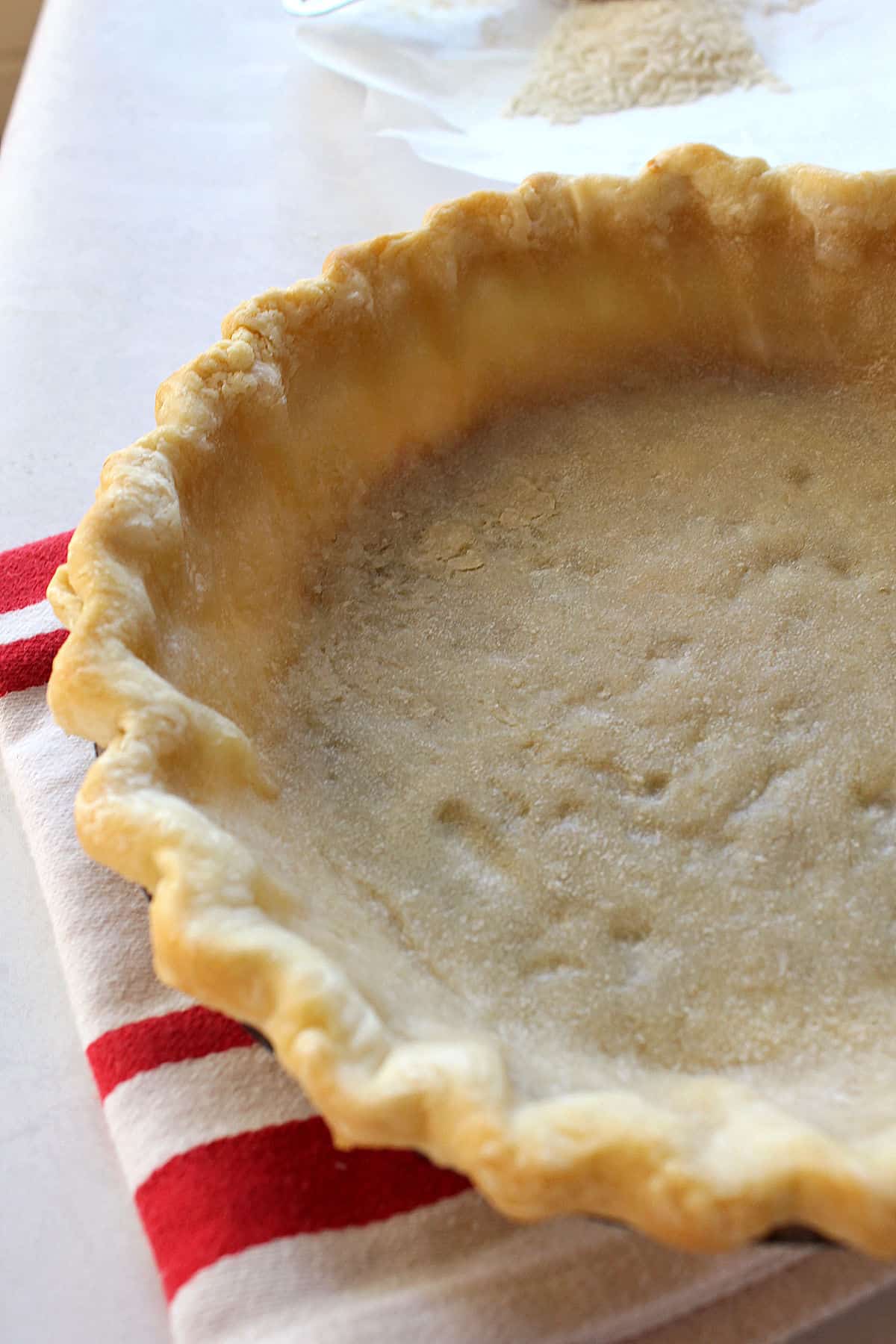 Step 5. Next dock the partially baked pie shell on the sides and bottom with a fork. 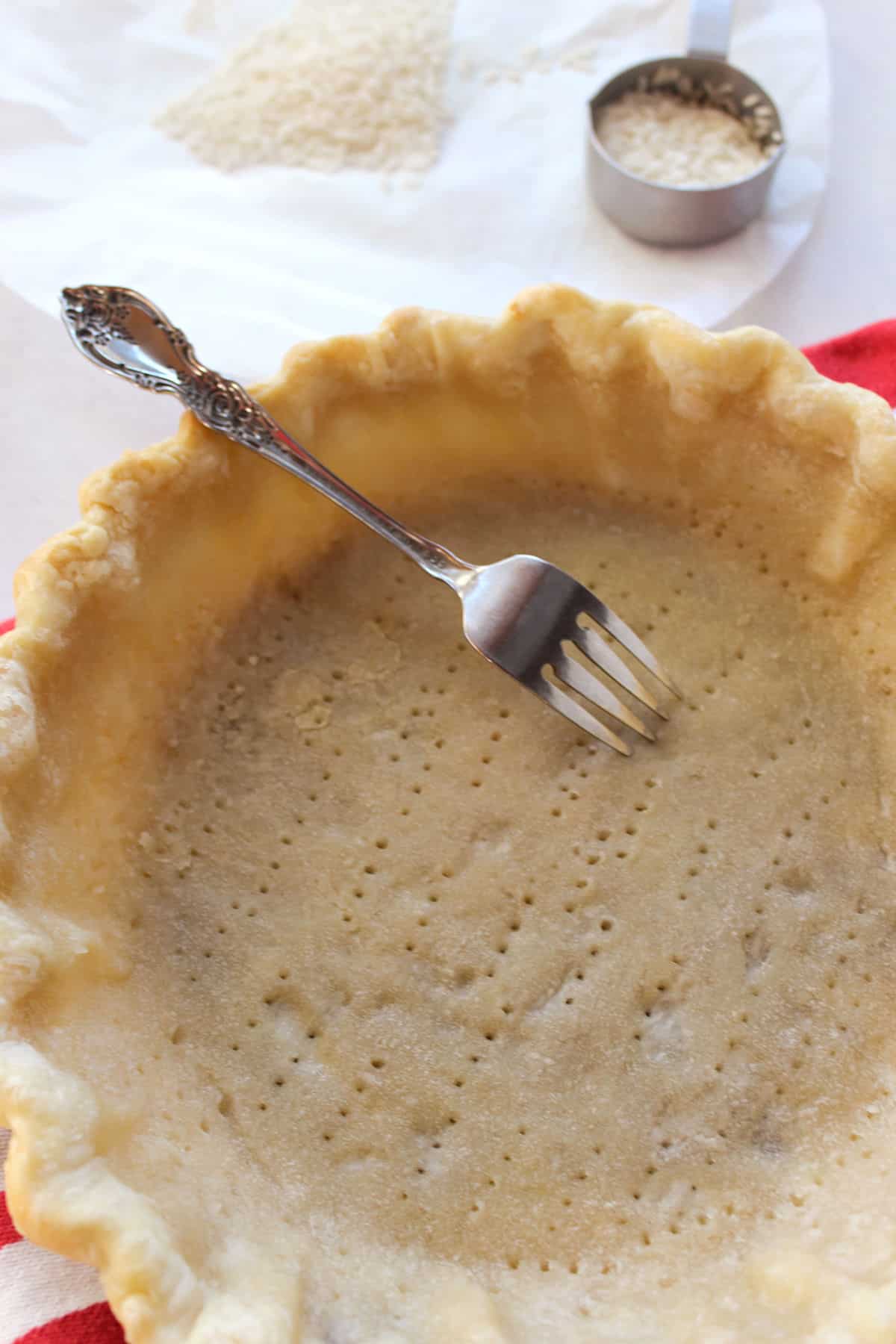 Step 6. Return the crust to the oven and bake for 15 to 20 minutes until golden brown. 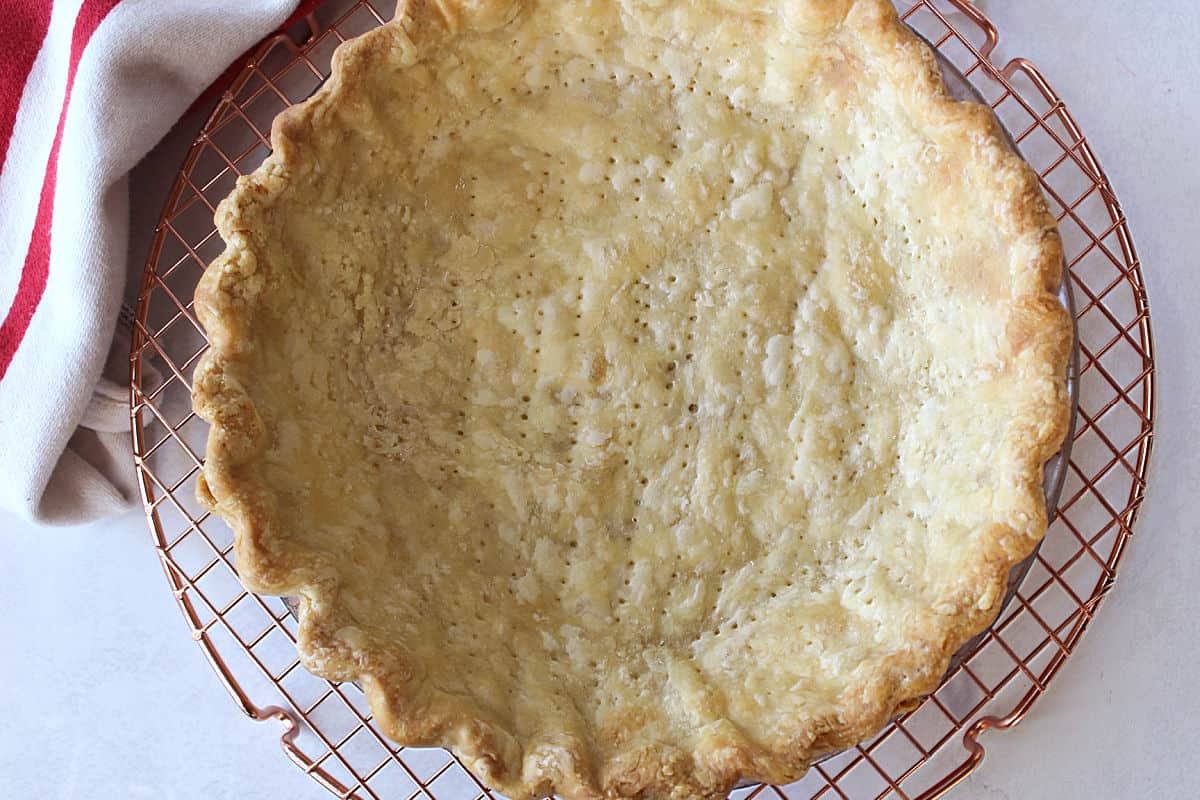 This is how your baked pie shell should look like after chilling, weighting, and docking.  The crust held its shape, no bubbles, it is flaky and nicely browned and perfect for a luscious cream filling.

I just made Grandmas Butterscotch Meringue Pie and used this pie shell.  It came out perfect.

Here's my favorite recipe for a no rolled pie crust dessert, try this Apple Galette with Cranberries.  It's quick and easy and very adaptable to so many other fruits.

One important tool when making pie dough is the rolling pin.  I love, love this French wooden rolling pin.  The tapered ends give you more control when rolling doughs.  And, don't forget your pie plate.

Don't forget to Pin for later 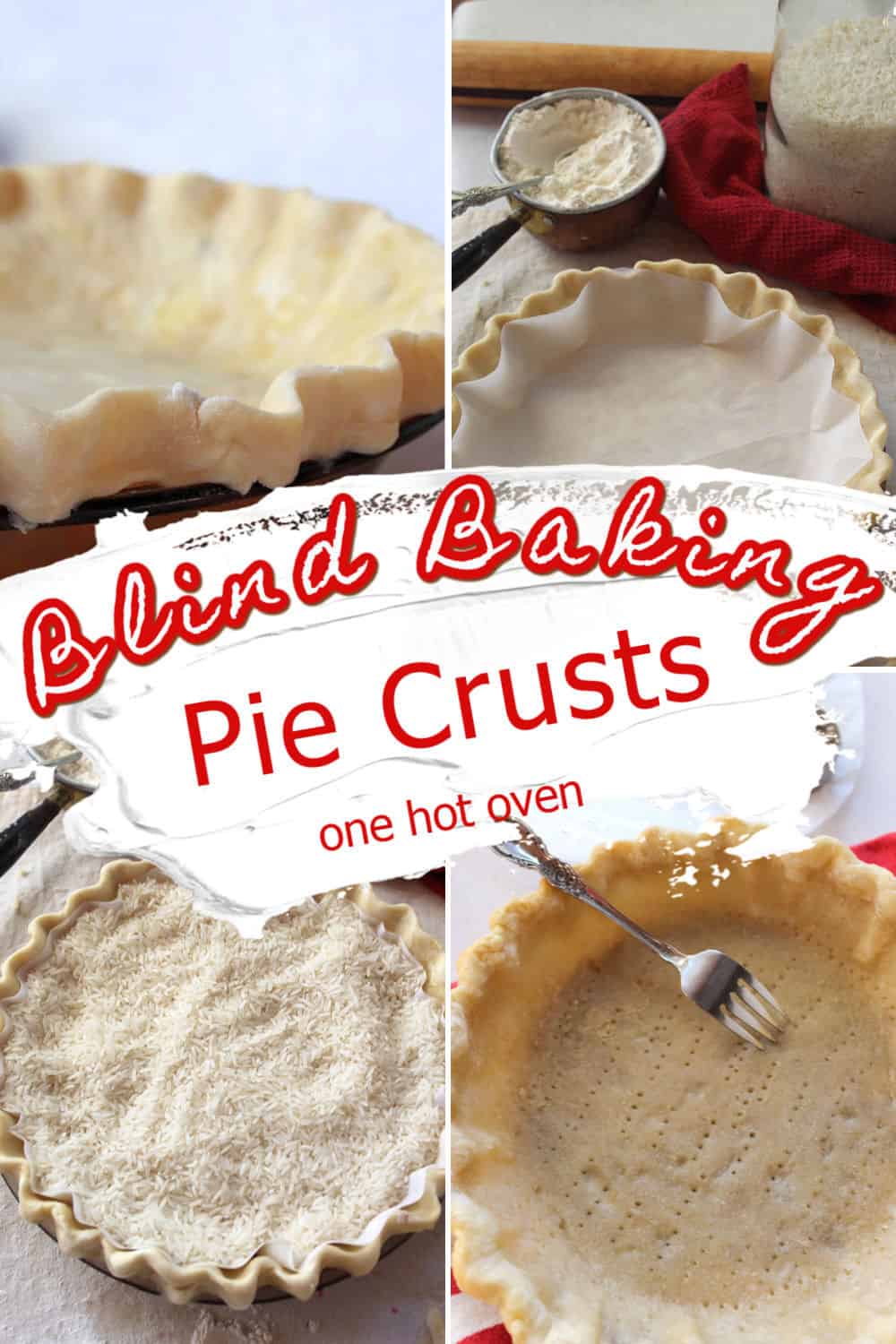 If pies are your thing, here are more One Hot Oven Pie and Tart Recipes

This rich Shortcrust Dough Recipe is perfect for making all kinds of tarts from creamy and sweet to savory. 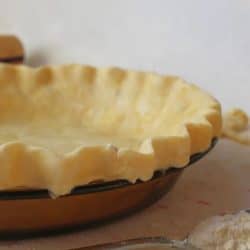 Pie Baking Tips Chill the pie dough before baking, this gets the butter and shortening cold again which results in flakiness You can reuse the rice once you can still use it for your rice side dish. Or keep this rice in a ziplock bag and keep reusing it for more pies.   As with any pie crust, watch the edges that tend to get too brown. I use this pie crust shield a lot, especially when baking fruit pies.

Serving: 8Calories: 193kcalCarbohydrates: 17.9gFat: 12.4gCholesterol: 15mgSodium: 41mg
Tried this recipe?Let us know how it was!

Don't forget to Pin for later ~

Like what you see? Make sure you are following One Hot Oven for more tasty sweet and savory recipes!

Thank you for stopping by the One Hot Oven blog.  Please leave a comment to say Hello or just let me know what you are baking these days, I always love hearing from fellow bakers.

Have any questions or just want to chat about the recipe? Contact me here, and I’ll be happy to help!

From learning to cook on a farm in Indiana to culinary school in California,  my passion for food is never-ending.  Turning on my oven to bake something for friends and family is my happy place, and I am glad to be here at One Hot Oven sharing both sweet and savory recipes with all my baking friends. 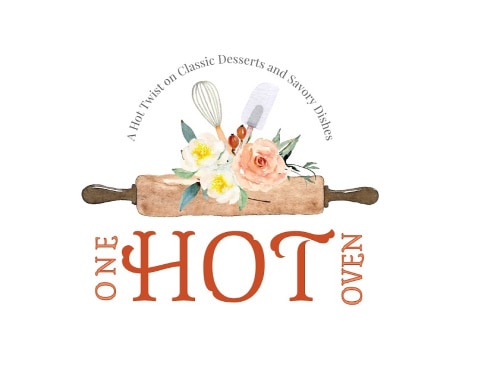 For the Tea Lover