You are here: Home / All Time Favorites / What is Vanilla? A Delicious Guide to Your Favorite Spice

What is vanilla?  If you have ever wondered about the types of vanilla or anything else about this popular spice, you’ve come to the right place.  Here’s your Vanilla 101 guide. 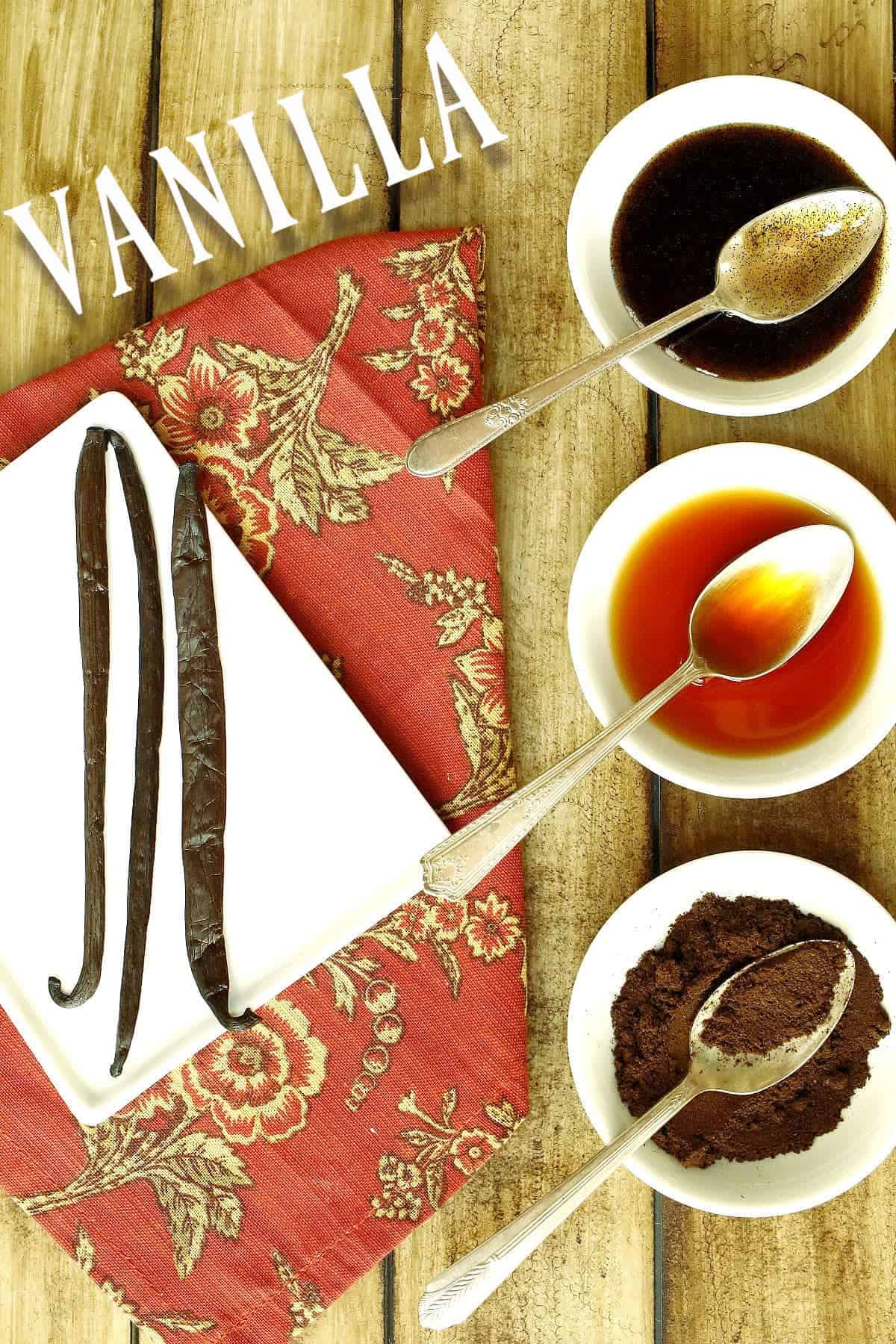 This page may contain affiliate links, please see my full disclosure for policy details. I earn commissions if you shop through the links on this page.

And it’s anything but bland.

Let’s take a few moments to learn more about this powerful spice desired around the world.

The common term “vanilla bean” is misleading, because as it turns out, vanilla is not actually a bean at all. Instead, the bean-like pod is the fruit that orchids in the Vanilla family produce.

The word “vanilla” itself comes from the diminutive of the Spanish word for “pod’ so that it translates as “little pod” in reference to the pods (or flowers) on the orchid plants. These pods contain thousands of tiny seeds that hold the complex and magnificent flavor vanilla is known for.

The majority of vanilla-flavored foods can have a reputation for being dull or boring.

In fact, that’s where the phrase “plain vanilla” comes from. The reason may be that the vast majority of vanilla-flavored foods don’t actually contain vanilla.

Instead, they simply contain an artificially-produced version of the most prominent flavor component in vanilla: vanillin.

However, vanillin is nothing like real vanilla, which is why the products that use artificial vanillin seem plain.

Those little pods of true vanilla contain a taste unlike anything else – and with more than 250 other flavor components in the seeds, it’s anything but dull.

The use of vanilla is believed to date back to the eastern Mexican people in the 15th century. Spanish conquistador Hernán Cortéz is credited with introducing the Europeans to vanilla in the 1520s.

Vanilla orchids can only grow in a small portion of the world (tropical areas), and until the 19th century, Mexico was the primary producer of vanilla. Now, vanilla orchids grow in Mexico, Réunion, the Indonesian islands, and Madagascar.

Vanilla is the world’s second most expensive spice (behind saffron) for a couple of reasons:

How Many Types of Vanilla Are There?

There are three main types of vanilla grown around the world. They include:

These two islands produce seventy-five percent of the world’s vanilla supply. It has a creamy and rich flavor.

Vanilla from Mexico is harder to find, and it’s darker, smoother, and bolder than Madagascar vanilla. It also contains smokey undertones.

Tahitian vanilla contains less vanillin and has a more floral scent and taste.

In addition to these main varieties of vanilla, there are also three less common varieties: 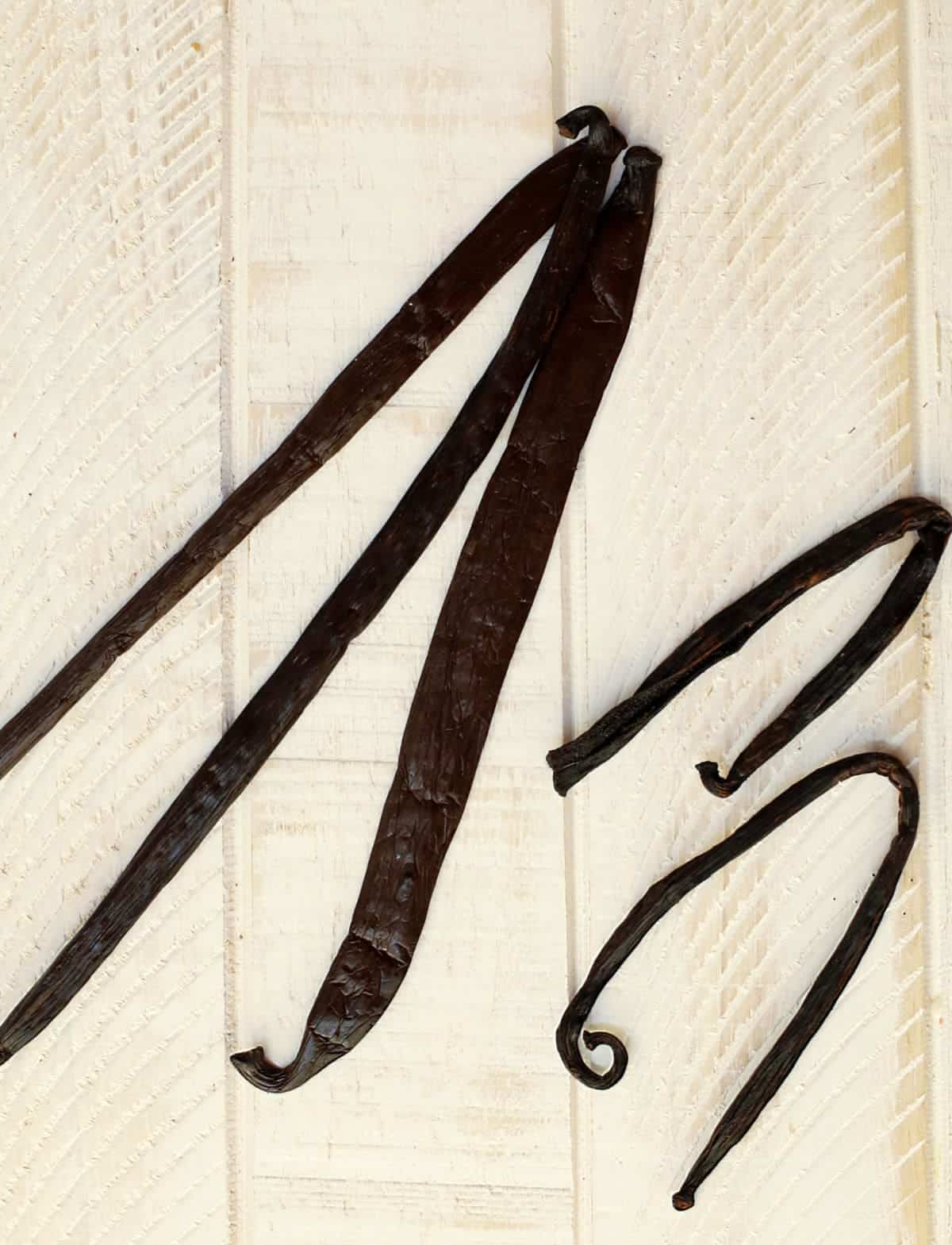 What is Vanilla? The Most Common Vanilla Products

Vanilla is produced as several different products. Which products you want to buy will depend on how you want to use them. Here’s a quick summary of each of them.

To make vanilla extract, soak vanilla pods in water and alcohol for about 2 months. This allows vanilla’s flavor complexities to infuse into the liquid. Pure vanilla must contain 35% alcohol and 13.35 ounces of vanilla beans per gallon to meet FDA standards.

This is the most common way to use vanilla.

Best uses for pure vanilla: All-purpose desserts and baking (and even some savory dishes).

How to use pure vanilla: Since vanilla extract does not alter the structure of your food, simply use more or less based on the amount of flavor your desire.

Vanilla flavoring is made just like vanilla extract is except for the fact that the beans soak in propylene glycol instead of alcohol. Even though it’s alcohol-free, it’s still made from pure vanilla beans so it is not imitation vanilla.

How to use vanilla flavoring: Substitute vanilla powder 1:1 for vanilla extract in your recipe.

Vanilla beans are the entire vanilla pods from the Vanilla orchid. Each pod contains thousands of tiny seeds that hold concentrated vanilla flavor and give that famous tiny black seed look that vanilla is known for.

Best uses for vanilla beans: Desserts where vanilla is a primary flavor.

How to use vanilla beans:  Using pliable, soft vanilla beans, cut each bean in half and use a pairing knife to split it open down the center. Use the knife blade to scrape out all the seeds. Use 1 vanilla bean pod for each tsp of vanilla extract.

Vanilla bean paste is a combination of vanilla powder and concentrated vanilla extract. It creates a paste that has the consistency of maple syrup. The paste contains a more intense vanilla flavor than vanilla extract as well as the classic tiny black seeds.

Best uses for vanilla bean paste: Anywhere you want the seeds to really show in baking, ice cream, and more.

Vanilla powder is the product of ground-up dried vanilla beans. And, it has a more intense flavor than vanilla extract.

Best uses for vanilla powder: in baking, in dry mixes (like homemade pancake mix), as a natural sweetener, or add it to coffee.

How to use vanilla powder: Substitute vanilla bean paste 1:1 for vanilla extract

How to Store Vanilla Beans

How to Revive Dried Vanilla Beans

If your vanilla beans are dry, it is easy to restore them! Do this by putting them in a shallow bowl or pie dish and cover them with warm water or milk until the pods soften. 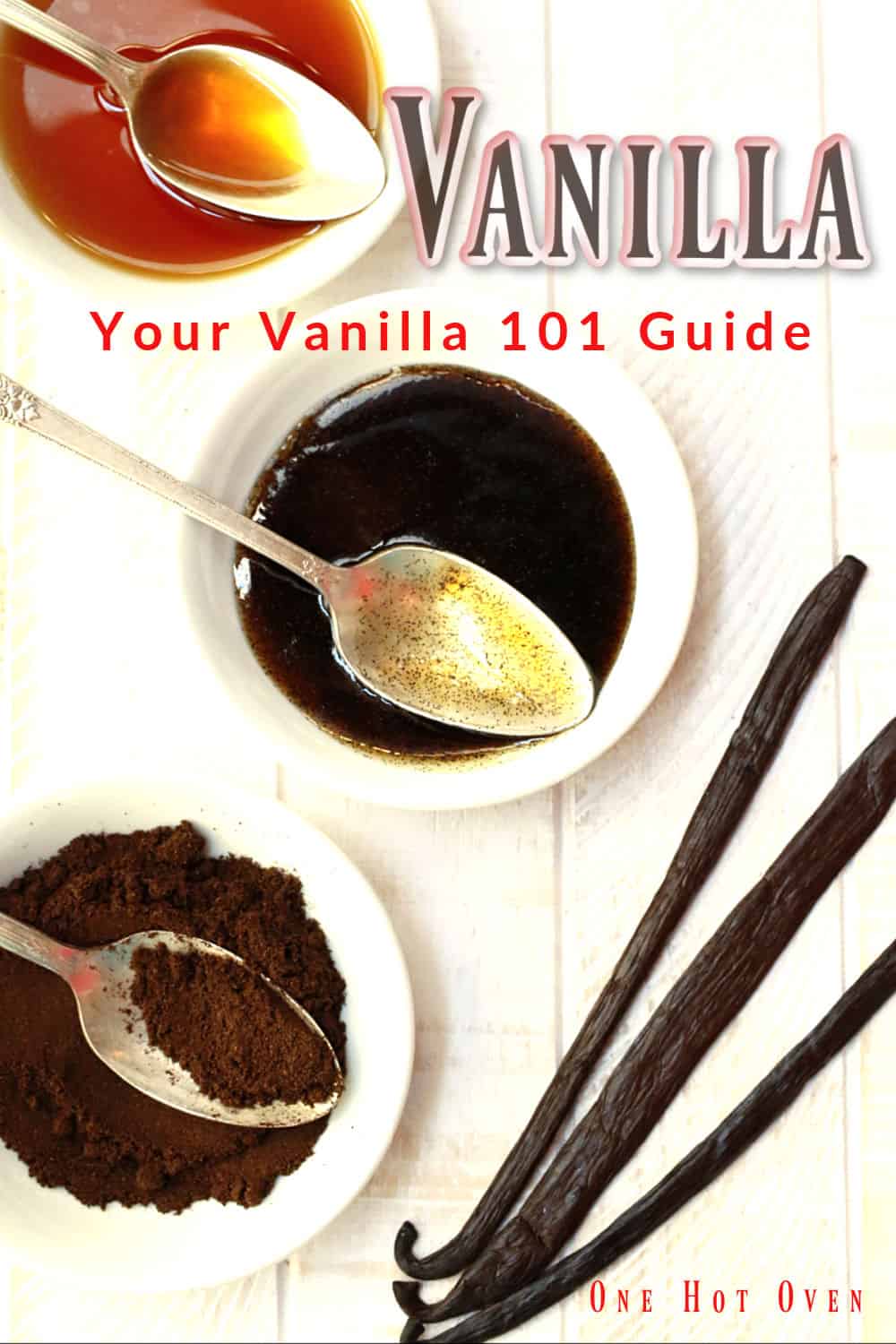 If You Love Vanilla, You’ll Love These Recipes:

Good vanilla is expensive, there I said it! This is what I do, splurge. I have learned my lesson, cheap vanilla anything doesn’t taste like anything, good vanilla makes a recipe memorable.

Vanilla Extract – When baking I prefer using Marsden & Bathe Bourbon Vanilla or Nielsen-Massey Bourbon Vanilla. Both deliver on flavor and your cakes and cookies will taste delicious.

Vanilla Beans – I am a firm believer in buying good quality vanilla beans and again I use SloFoodGroup Madagascar Vanilla Beans that are plump and very aromatic.

Thank you for stopping by the One Hot Oven blog.  Please leave a comment to say Hello or just let me know what you are baking these days.

From learning to cook on a farm in Indiana to culinary school in California, my passion for food is never-ending.  Turning on my oven to bake something for friends and family is my happy place, and I am glad to be here at One Hot Oven sharing both sweet and savory recipes with all my baking friends.

Have any questions or just want to chat about the recipe? Contact me here, and I’ll be happy to help! 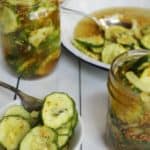 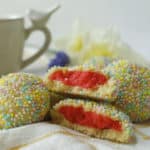 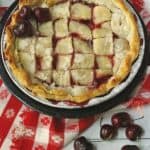 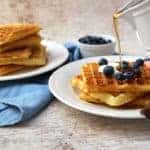 Don’t let the ghouls and goblins scare you away from Halloween, give them these deliciously spooky Halloween Sprinkle Sugar Cookies that have a surprise cinnamon filling, and they will become your best friends. “The middle filling is such a fun surprise” This page may contain affiliate links, please see my full disclosure for policy details. I…

END_OF_DOCUMENT_TOKEN_TO_BE_REPLACED

We use cookies to ensure that we give you the best experience on our website. If you continue to use this site we will assume that you agree.OkNoPrivacy policy